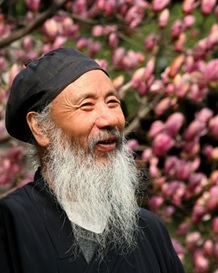 This text was translated from a version of the 道德经 Dào dé jīng, commented by the ex-president of the Chinese Daoist Association, 任法融 Rèn Fă Róng.

(Original Text) Trying to reconcile a great feud, there will surely be many resentments. With calmness, can one be virtuous?

[Commentary by 任法融 Rèn Fă Róng]It seems that people are blinded with greed; they fight for power and wealth,

Even if they try to reconcile by getting rid of this great hatred, lots of angry feelings will inevitably remain inside the mind.

There are different kinds of anger, and some people want to overcome this and reconcile. ¿What may be the most natural or the right way to do this?

(Original Text) This is why the sage takes in his left hand the “agreement” but does not demand the payment to the other person.

[Commentary by 任法融 Rèn Fă Róng] Any can obtain the ability to eliminate his selfish desires, greed specifically,

if he cultivates his natural virtue, abandoning resentfulness and demands, soothing his own bitterness.

The term “契” qì is an agreement between two people where a loan is registered; this agreement was represented with a token which separates in two pieces.

When the debt was paid on time, the right piece and the left piece were inevitably put together again to demonstrate that the agreement had ended.

When the agreement starts both parts feel inevitably grateful and both even feel sympathy for each other.

If the debt is not paid on time, this will cause the creditors to look for a way of being paid.

It doesn’t matter if the loan is not paid yet; not all creditors think in keeping the peace, which may cause certain resentment.

This is why, people with virtue are like those creditors who wait with their “left piece” of the agreement; these people are charitable.

Without noticing it, that makes other people to want to be thankful and to appreciate virtue, and not demanding to end the deal, nor getting self-absorbed.

A person without virtue will do everything which is possible to charge interests, he wont try to reach a settlement with the other person.

A person without virtue will do everything which is possible to charge interests; he didn’t even wanted to make a loan in the first place but they were led to do it.

Inevitably, this will make the people to have feelings of hatred; that is why resentment comes out from their mouths.

The Dào of Heaven is disinterested and selfless, it does not have any preference, in its presence we are all equal.