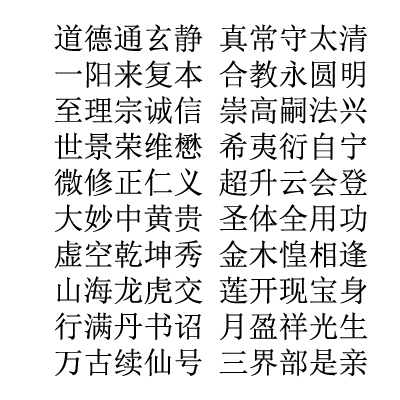 Taoist name is the name which is given in accordance to the school’s generation name after a Taoist is initiated. It primarily refers to the name which is specially given to one who has been initiated into Taoism. Unlike Taoist titles, generally Taoist names have two characters, and it is styled following the respective school’s generation character name.

Internally in Taoism, ”Taoist names” are not casually addressed, only the master of the Taoist Priest or elders may address them as such, outsiders can only address them via their “Taoist Titles”. The styling of Taoist names are strictly restricted by the generation character name.